The Search for True Dialogue 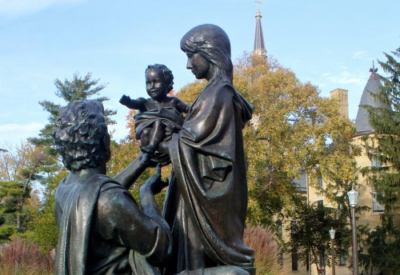 After a turbulent election season, I enjoyed going home, escaping the noise, and spending a holiday with family. Still, I knew that not all cases were like mine—particularly as I recalled an article I had read that described people cancelling trips to Thanksgiving dinners or moving wedding dates in order to avoid the presence of those who voted a certain way. Clearly, tensions have run high. While those examples struck me as extreme, they did not seem terribly far from some of the actions on our own campus. I know of people who have “un-friended” Facebook friends, cursed and insulted others to their faces, and even, in the case of a certain student organization, threatened to ban club officers—all in response to those who have revealed that they voted for Donald Trump.

Of course, everyone is free to express his or her opinion—even if that opinion involves anger—but does that freedom entitle us to isolate ourselves from or condemn those who disagree? Some might call that a legitimate freedom of expression, but it strikes me as an abuse of that freedom.

Let me be clear: I do not intend to criticize these reactions on campus because of the opinions or feelings they express. Such behavior would be unacceptable in any situation. Had Hillary Clinton been elected President of the United States, would her opponents have the right to condemn those who voted for her as heartless people who viciously support the murder of unborn (and even partially born) babies? Certainly not. (It is also likely that they would not have even tried such a response, knowing that it would instantly be labeled as ignorant bigotry.)

One conclusion I have drawn since the election is that Americans, myself included, do not understand one another. I know that not all those who are upset about the election’s outcome are harassing those who feel differently. I want to understand why they voted (or abstained) the way they did and why they feel the way they do. Goodness exists in every human heart, and I want to see how it dwells, struggles, and grows in everyone around me.

I have found that many of my classmates share this desire—but also see the huge difficulty of fulfilling it. In most cases, people do not want to talk. They do not want to reveal their deeply held opinions and emotions or pry into others’. They close themselves off because of anger, fear of ruining a relationship, or just unwillingness to reach outside of their comfortable echo chamber of opinion.

I see the difficulty, and it is daunting, but how can we make any positive difference in society if we do not at least listen to each other? This is an essential element of real dialogue—an activity that is championed throughout our society and campus but that I still find sadly lacking.

Three days after the election, University President Father John Jenkins, CSC, sent an email to the Notre Dame community that called for an “Interfaith Prayer Service for Respect and Solidarity.” According to the email, the event was to serve as a response to an “acrimonious election season” and a time to pray for “peace in our nation, wisdom for our leaders, and care for the most vulnerable.” I sincerely admire the initiative to gather in prayer in the midst of widespread concern and uncertainty. At the same time, the event raised some questions.

Firstly, would the prayer service have occurred regardless of the outcome of the election? A fiercely pro-abortion president—one who strongly opposes the Hyde Amendment, favors the HHS mandate, and champions Planned Parenthood—would certainly have ignited strong worries. In a similar vein, why has Notre Dame not hosted such prayer services in the past? In many areas of social justice, we have had great reason to pray for our leaders and our country.

In response to my questions, Assistant Vice President for University Communications Dennis Brown defended this particular prayer service’s appropriateness by briefly quoting Father Jenkins’ assertion that this election has “revealed and perhaps deepened divisions in our country and in this community” in an unprecedented way. He made no further comment about whether the service would have taken place regardless of the outcome or about Notre Dame’s plans to pray for leaders, past or future.

It is true that legitimate worries—particularly regarding immigration—have arisen as a result of this election season, and I do want to continue learning about and discussing them and potential solutions. Still, those worries do not reflect every layer of the election.

While there is cause for worry, there is also great cause for hope. America has dodged a presidency that could have attacked unborn life more aggressively than ever and, furthermore, received a president that could potentially help the pro-life movement, such as through the Supreme Court appointments. It would have been more than appropriate for our Catholic university to acknowledge these hopes alongside the fears.

What I am going to mention next may upset some people, but I feel compelled to write truthfully, and I write with the greatest compassion for immigrants, women, and all minorities; I am Hispanic and the granddaughter of immigrants. Both immigration and the defense of unborn life are important parts of Catholic social teaching, but unquestionably, the latter addresses an issue of more fundamental moral gravity. We must defend all of those who are vulnerable in any way—but especially those who are completely innocent and cannot speak for themselves at all.

Because of that duty, it is not only appropriate but also necessary for Notre Dame to be pro-life, support pro-life action, and acknowledge—however conditioned—victories in the pro-life movement.

This approach need not be partisan, and it may very well acknowledge valid claims on all ends of the political spectrum, but it does need to be comprehensively Catholic.

Unfortunately, Notre Dame’s recent past has not seen prayer services for the leaders whose policies threaten the lives of unborn children—as well as the real health of mothers—but has instead seen a celebration of those leaders. Why? I think this goes back to a misunderstanding of real dialogue. Yes, we must listen to the opinion of all and actively try to understand those around us. But fundamentally, dialogue does not mean that we all say what we want, digest the others’ statements, and then go on our merry way. Dialogue must be a quest for truth. When we have the gift of knowing something true, we must patiently listen to the other, agree with what is correct, and then charitably—but unwaveringly—uphold that truth.

Anything less would not only be a disservice to the building of a better society but also a failure to live an authentically Christian life.

Sophia Buono is a junior PLS major and ESS minor. She first fell in love with Notre Dame when she made her high school visit and heard on a tour that each graduate’s diploma has a bit of gold from the Dome in it. Contact Sophia at sbuono@nd.edu.